We all love Markdown, right? It’s a fast and user-friendly way to beautify our documentation. Well, all that glitters is not gold, in this case not for system administrators.

Some time ago playing the Hack.lu 2017 CTF event with my team we solved an interesting challenge called Mitsune were a misconfigured instance of mitsune was given and we had to send a malicious link containing an XSS payload to an administrator to steal their cookies. You can find two writeup with different approaches here and here.

After the end of the CTF, my teammate Donato Onofri and I started to investigate more on how this vulnerability affects worldwide markdown services and we ended up with multiple reports (here, here and here) But as you can see all of those are relatively small services.

During my investigation I found that even pastebin was affected by this kind of vulnerability.

When we create a new paste we can select which language to use for the syntax highlight. In this list there is also a Premium only pick for Markdown parsing, let’s try it. 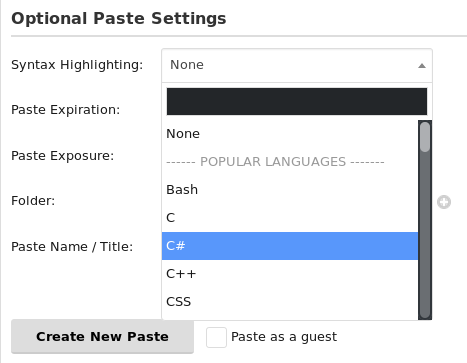 First I tried to send a simple HTML body to see if it’s interpreted but without success.

I also tried a simple payload using [link](<script>alert(1)</script>) but apparently the script tag is not interpreted neither. Lastly I tried the old trick we used to solve the Mitsune challenge: we used a base64 payload and the content-type base64 to let the javascript handle the decoding and the execution. I crafted a new markdown link entity, containing the following payload:

and I generated a new paste. Clicking on the link I finally got an alert, confirming that my payload was working.

The cool part is that you need a premium account to generate the paste but you can send it with anyone :)

Some time after I found and reported the vulnerability I finally received an email from the pastebin administrators claiming that they patched it.

I gave it a look and found that they blocked the data entity and my old PoC was no longer working.

Markdown XSS are real and tons of services are affected due to unsanitized output. If you maintain a project that is using a markdown parser I suggest you to read this, if you are a pentester or a bug hunter I suggest you to starting consider this kind of vulnerability (I even got a CVE :P)

Fun fact: during an event, I was talking about CTFs and someone told me: “I don’t play CTFs because they are not real world scenarios” :)

Note: As pointed out here the first payload,on recent browsers, will lose the context of the webpage where it was triggered.

Publishing this writeup on reddit.com we found out that the new interface was affected by this vulnerability :)